Can My Dog Watch TV and FaceTime? 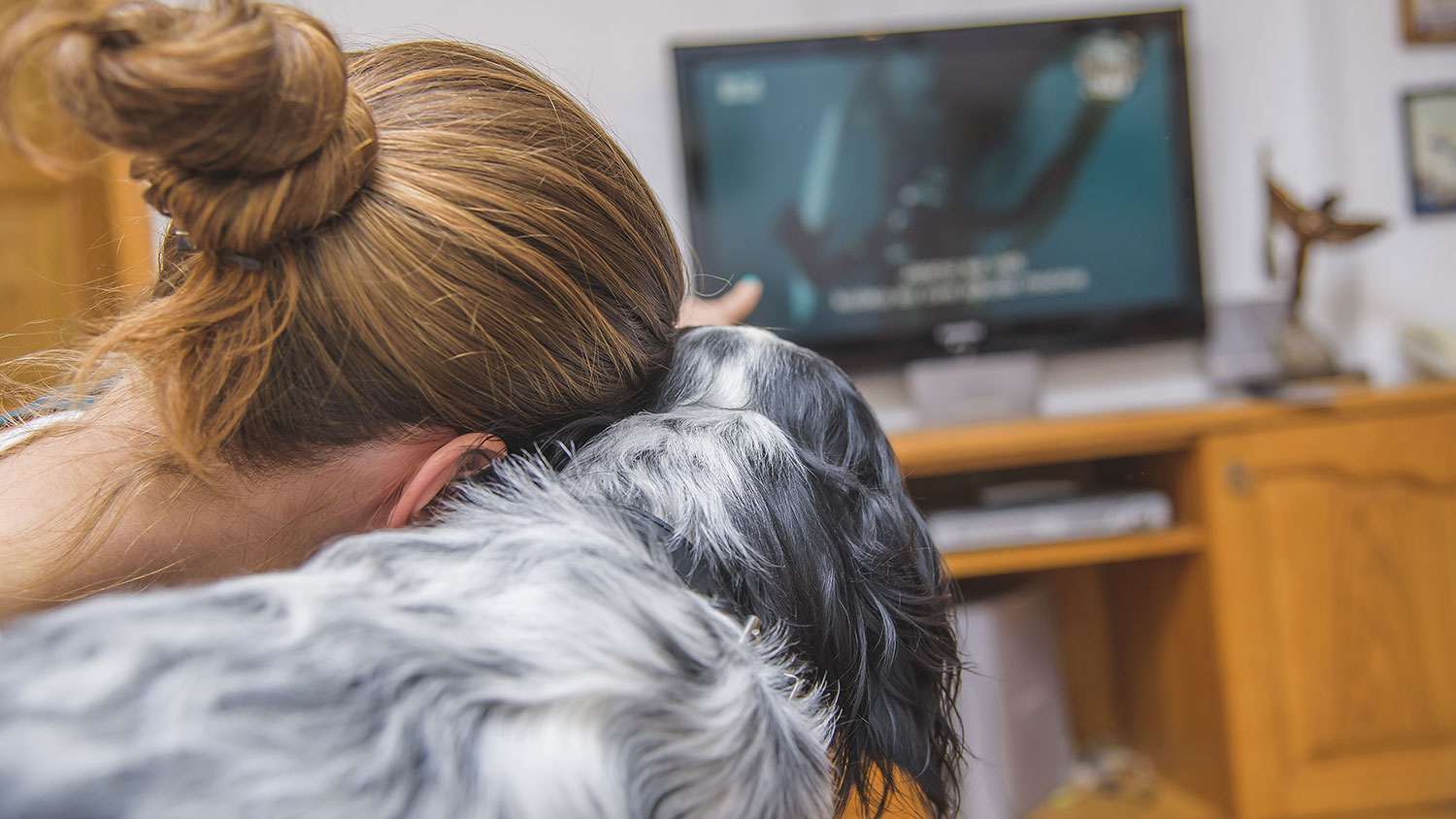 Why is it that some dogs seem to react to TV – to huge plays during a football game or to other animals on TV – and other dogs just ignore it? And some dogs who seem to react excitedly to action on TV are also the same dogs who ignore us when we try to FaceTime (or video call) them?

Can dogs see what’s on the TV?

According to petMD, dogs who react excitedly – barking, lunging, and standing up to get closer to the TV – may be reacting to more than the image. Motion on the TV is stimulating. Dogs are hard-wired to chase things that move and are better at detecting motion than humans. Thus, an animal on the screen may warrant chasing. Some experts also suggest that the dog is reacting to the sounds on the TV and not the picture; dogs have a much keener sense of hearing than humans do.

“Most of us have witnessed our dog glance at the TV from time to time and have our suspicions about how much they can see. However, it’s difficult to test their vision and truly know what they perceive. Our knowledge of the canine eye helps us, but doesn’t give us the full picture,” explained Dr. Una Stone, DVM, at Wake Veterinary Hospital & Urgent Care in Knightdale, North Carolina. Dr. Stone continued, “Rods help with night vision and detecting motion - versus cones, which provide more detail and color.” Dogs have more rods in their retinas than humans do. As a result, dogs do not see as clearly as humans do and do not see the full color spectrum that humans enjoy.

Why do some dogs not react to TV?

Like people, dogs find different things interesting. You may love tennis but find a game of cards boring. One of your dogs may bark hysterically at a delivery man and your other dog calmly wags his tail and doesn’t bother to get up when a package arrives at the front door. Thus, some dogs find TV entertaining and others are not stimulated at all by the sight and sounds of TV.

TV also appears more stationary to a canine eye than to a human eye, according to the Veterinary Medical Center of Long Island. Dogs detect and update images to the brain faster than humans do. Thus, when a TV refreshes the images at 60 Hz (60 times per minute), dogs often perceive the images as flickering instead of fluid motion as the human eye does.  In contrast, humans would need the TV to refresh at approximately 50 Hz in order for it to appear to flicker. To see a fluid picture, The Bark states that a dog would need the TV to refresh at greater than 75 Hz. Some newer HDTVs operate at a higher Hz rate (120 or faster) and those images are likely more dog-viewing friendly. Perhaps you should get a better TV if you want to watch TV with your pup?

In summary, your dog cannot fully enjoy TV as much as you do. Your dog can recognize some of the images but is most likely responding to sounds on the TV or even taking cues from you, the owner. If you jump up and cheer every time there is crazy motion on the TV during a football game, your dog may be responding to your body movements and facial expressions. In other words, your reactions to motion on TV could be a prompt to your dog’s animated reactions to the TV!

Can your dog FaceTime?

You miss your dog and want to FaceTime with the pet sitter. Your dog couldn’t care less about your image and your voice over the phone. Why? And yet your friend says his dog will video chat with him! Is your dog just brushing you off because he’s annoyed that you’re not home?

According to National Geographic, smaller screens, such as a phone or tablet, make it much harder for your dog to recognize your image. If you’re video chatting on a large screen, dogs tend to respond more to the larger image of you. Some dogs do still respond to smaller screens and some dogs don’t respond no matter what size the screen is! As we learned above regarding TV viewing, some dogs are more engaged by visual stimuli than others.

Some companies have developed a device to let you video chat with your dog and then dispense a treat from the same device. Your dog is likely just trotting over to the device when a noise occurs because a treat has been delivered after that noise in the past during a prior “call.” Your dog doesn’t know it’s a “live conversation.” Your dog wants the treat and you want to see your dog, so perhaps it’s win-win after all!

Thus, there is no consistent answer for whether or not your dog will respond to your video call. Your dog is not expecting to see you on the screen and it’s an odd place to “find” you. Your dog is also very used to ignoring the voices on the phone when you video or voice call your friends – in other words, your dog is already conditioned to think that the smaller device is meaningless to his existence.