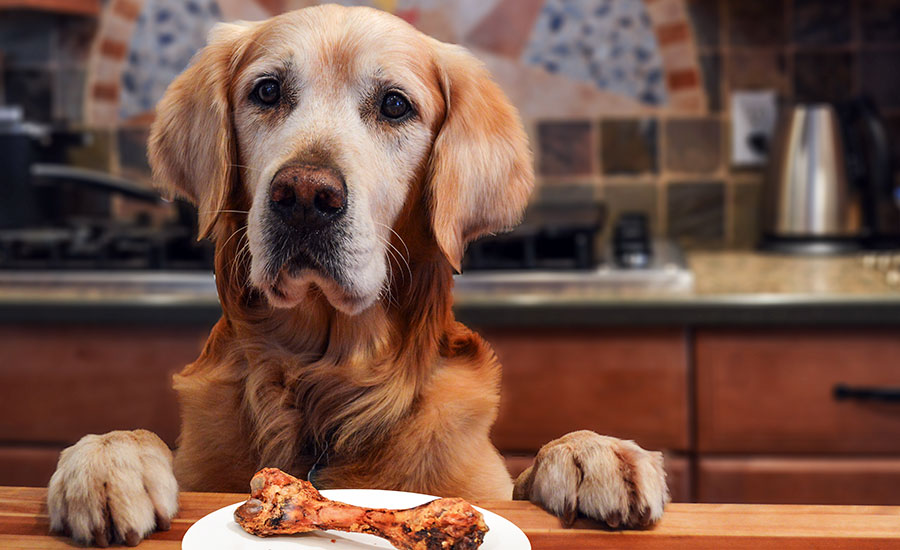 Years ago, my lab-husky mix Salem looked a little pudgy. I thought, “I need to feed her less.” Later I decided to have a piece of homemade strawberry bread – I had picked the strawberries from a strawberry patch – and the bread was nowhere to be found. The culprit? Salem! She ate the entire loaf of bread and hid the ripped baggie. Her swollen belly was the result of her prize!

Some dogs are sneaky about counter surfing, as Salem was, and wouldn’t dare try it in front of you. Instead, they watch you and wait for an opportunity. Other dogs will shamelessly attempt to steal from the counter right in front of you!

Once a dog is rewarded for counter surfing by obtaining treasure, it can be a hard habit to break. If your dog does already counter surf, do not despair. Here’s how to improve your dog’s kitchen etiquette:

Never leave your dog in the kitchen unattended.

If you are in the kitchen but cannot monitor your dog’s behavior (because you’re busy multi-tasking), then do not allow your dog in the kitchen during that time. Managing your dog’s access prevents the dog from getting a reward from the counter. Use baby gates to keep the dog in others rooms or tether your puppy to your waist with a leash so the dog is with you instead of sneaking into the kitchen for a potential snack.

Do not leave food unattended on the counter.

Without delicious smells, the dog will be less likely to investigate. Of course, you will have food on the counter when you're cooking, so do not leave the room or food unattended unless your dog is secured.

When you are in the kitchen and your dog is not counter surfing, reward him with kibble (or treats) for having all four paws on the floor. Better yet, if your dog is lying down near you on a dog bed or mat, reward the dog often. Thus, the dog will think, “Better things happen to me when I am in this place than when I counter surf.” Dogs repeat behaviors that work. If your dog “wins” by lying down and not surfing, then he’ll keep repeating that behavior. The bed behavior becomes the default kitchen behavior for the dog.  Gradually over time, reduce the rewards for the good behavior.

If you catch your dog with his paws or muzzle on the counter, interrupt the behavior with a verbal "eh-eh" in a neutral, non-angry but non-happy voice and gently guide your dog by his collar to his nearby crate for a 20 second time out. Yes, 20 seconds. Not 20 minutes. Let him out of the crate. If he surfs again, repeat the verbal interruption and time out. This will NOT make him hate his crate. Human teenagers don't hate their room when they get sent there for a time out.

Many dogs dislike citrus. Leave sliced lemons, limes and oranges to deter your dog from inspecting the counter for opportunities. For a dog that dislikes lemons, make a lemon-juice sandwich for your dog and leave it on the edge of the counter. Your dog may decide that your food is gross!

If your dog doesn’t already counter surf or if you have a growing puppy that cannot yet reach the counter, ensure that lovely kitchen behaviors continue by doing steps 1, 2 and 3 above. Reinforce the behaviors that you like so those behaviors continue! Consider enrolling your dog in pet insurance to protect against unexpected accidents and illnesses that may arise from a counter surfing pup who falls off the counter or eats something he shouldn't! Get a quote today.