Teach Your Dog to Shake Paws 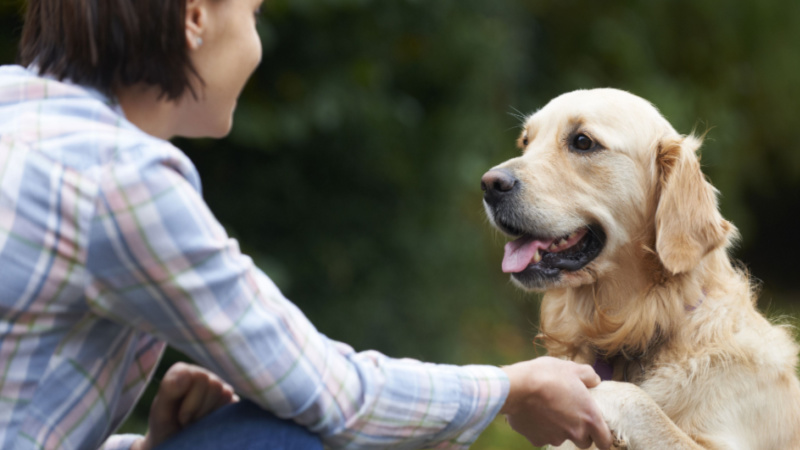 A classic dog trick is “the shake.” Dogs can learn to shake with all four paws – even their back paws! All you’ll need is a naming convention. The easiest thing to remember is numbers, and I use one and two for the front paws and three and four for the back paws (dog’s right and left, respectively).

Step-By-Step: How to Teach a Dog to Give a Paw

The first thing to do is grab some dog treats. Say “Yes” to mark each time your dog earns a treat, and follow that word by inserting a treat into your pooch’s mouth. The “Yes” will bridge the time gap. You won’t be able to get a treat into the dog’s mouth the second they move their paw just an inch off the ground.

Although there are a few ways to teach the shake, my favorite is gentle manipulation. That means we are going to touch our dog and be slightly annoying.

Have your dog face you. Ensure your dog is relaxed, either in a sit or stand (not a “Stay” position).

Your Dog Understands the Verbal Cue

Reach toward one of their front paws with an empty hand – do not have treats in this hand, or your dog will sniff it. If your dog lifts their paw on their own, say “Yes” and give them a treat.

Start to Incorporate Your Dog’s Paws

Tap the underside of their metacarpals multiple times -- you’ll be tapping almost toward yourself and slightly upward. The force of your tapping will not be enough to physically lift the dog’s paw, but it is enough to inspire a reaction. When your dog chooses to raise their paw an inch, say “Yes” and offer a treat. Repeat this several times. Again, you are not forcefully moving the dog’s paw off the ground – you’re just acting slightly obnoxious, so the dog lifts the paw on their own.

Teaching Your Dog to Shake

Begin saying your command word (“1” or “2”) for the front paw before you reach for the paw. Tap until the dog lifts their paw on their own, say “Yes” while the paw is in the air, and then offer a treat.

After you’ve mastered the front paws, it’s time for the back paws. Start with your dog standing and facing you. You again do the tappity-tap toward yourself on their lower metatarsals. When they lift their back foot, you’ll say “Yes” and offer a treat. Continue with the instructions in step four above.

Shake Hands with the Back Paws

The back paws generally take longer for the dog to learn. You may want to work on this daily for a few weeks before it finally starts to click. Be patient!

Benefits of Teaching a Dog to Shake

Teaching your dog to shake with their back paws creates abdominal strength, enhances balance, and makes your pup aware that they have back feet, also known as “rear end awareness.” Many canines go through life primarily focusing on their front legs, without rear-end awareness. Even if you don’t do formal dog sports like agility, teaching your dog to do “the shake” with their back paws can create a lot of smiles from other humans.

You can transition the shake command for the front paws into a “high-five.” Gradually change the angle of your hand from fingers pointed down to fingers pointed up with your palm still facing the dog. Say “Yes” when your dog touches your hand with their paw and offer a treat.

For added learning fun, check out our blogs on turning left and right, pouting, and the nose touch.

Training your dog so their paw touches your hand is more complicated than you think! It is vital though, since all dogs need to know some basic verbal commands to stay safe. For example, a "leave it" prevents your doggo from eating something they shouldn't. However, even the best training doesn’t prevent accidents from happening.

For those unexpected emergencies, AKC Pet Insurance (underwritten by Independence American Insurance Company) offers Accident and Illness Coverage that allows you to focus more on the health of your pet and less on costly veterinary bills. Policies also include the industry’s best pre-existing condition coverage after 365 days of continuous coverage*. Get a quote today and give your dog the pet insurance of champions!

*Not available in all states.