How to Train a Farm Dog 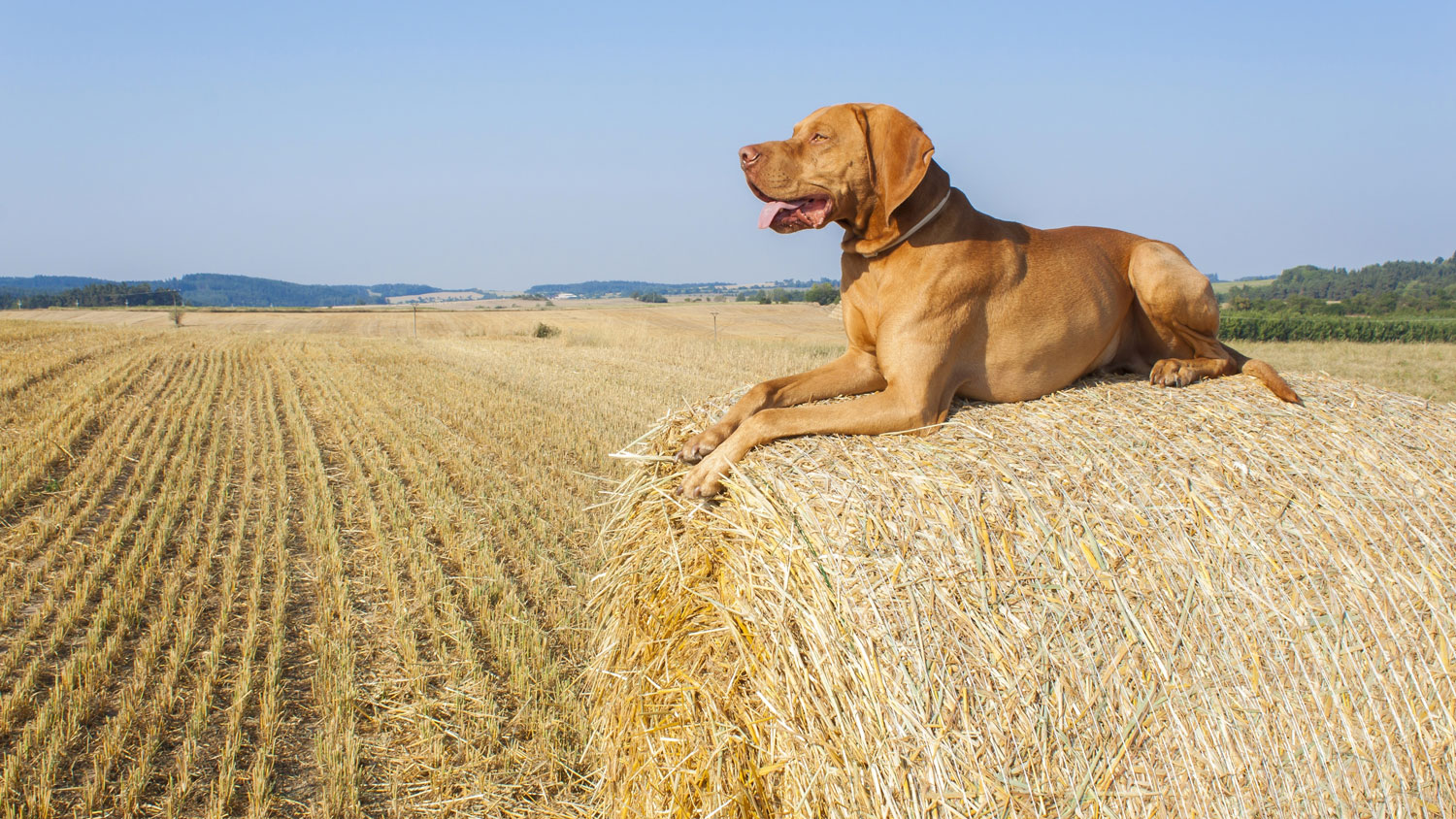 Whether you’re raising a new puppy in a farm setting or simply want to introduce your dog to the sights and sounds of a barnyard, it’s important to understand some basic farm safety.

Welcome to the Farm

Before your dog should step paw on a farm he needs to learn basic commands such as sit, come, stay, drop, leave it, and down. He should react to these commands every time they are given instead of when he feels like it. Remember that everything at the farm is new and exciting, so lots of treats and praise may be necessary to reinforce the behaviors that you want to encourage. If your pup gets into a dangerous situation while learning the ropes of the farm it’s important that you can get his attention and immediately take control of the situation before your dog or another animal gets injured.

Take your dog’s introduction to the barn slowly. Work on a leash so that you have control of your dog and can keep him out of harm’s way. Walk around the farm (without other animals present if possible) to get your dog comfortable in his surroundings. Many dogs will become excited with the new smells and animals and may forgot some of their basic training. If your dog becomes too overwhelmed and is no longer listening to your commands, remove him from the farm and go back to a neutral zone where he can calm down. It may take several short visits to the property before your dog is comfortable and calm enough to meet the barn residents.

When you introduce your dog to farm animals you should immediately teach what is acceptable and what actions won’t be tolerated. Don’t allow your dog to chase the other animals or bark at them. This sort of rude behavior can stress out your dog and the farm animals and may lead to a provoked animal lashing out at your dog. Teach your pup that his job is to stay nearby and watch (unless you intend to train him for a specific farm job such as herding). The best way to teach this is to keep him on a leash and introduce the animals slowly - one at a time if possible.

When introducing smaller animals, such as chickens or rabbits, you should have two people on hand - one to hold the small animal and the other to control the dog. Let your dog sniff the small animal, but then ask for his attention and reward him for returning his attention to you. If your dog acts aggressively or seems too eager to meet the new animal, try removing him from the situation until he’s ready to listen. Repeat the introductions until your dog is happy to ignore the small animal and instead keep his focus on you.

If you want to introduce your dog to a large animal such as a horse or cow, keep a fence between the two animals to start. Allow the horse/cow the freedom to move away from the fencing should he feel stressed out by the situation. Try to find a large animal that is already comfortable with dogs, so your dog is the only one having a new experience. Let them sniff over the fence, but correct aggressive behavior with a firm “no” and take your dog away to calm down if needed. Reward your dog with treats and praise for good behavior such as approaching and sniffing the other animal in a calm, quiet manner. Once your dog is reacting well to meeting over the fence, you can try an “exposed” introduction where your dog meets the other animal without anything between them. Ensure there are two people for this process so one can handle the farm animal and you can have your full attention on your dog.

It may take a few sessions of introducing your dog to each species of farm animal before he’s comfortable and happy to be around them. Your dog should respect the other farm animals (especially the larger variety) and know to keep in his own personal space.

From your dog’s first day on the farm, you should create off-limit areas. These will be areas such as enclosed pastures, bird coops, feed rooms, barn stalls or riding areas that your dog is absolutely not allowed to enter. Your dog may need to stay leashed or gated in the area that you’re working for the first few years so that you can keep a close eye on him and ensure he’s not sneaking off to break the rules.

There should be solid fencing encompassing the perimeter of the farm so that your dog can’t escape. Country roads often have traffic which can lead to your dog getting struck by a car and injured. It’s important to be a good neighbor as well, and your dog wandering into the barn next door could lead to trouble.

Fencing off certain areas of the farm to keep your dog out may be a good option to keep him safe. Fence off fields or vegetable patches that could contain plants that are toxic to dogs such as tomato plants or rhubarb. Consider choosing livestock fencing that doesn’t allow for your dog to sneak under the bottom if he can’t behave himself and stay out of the fields. One well-aimed kick from a cow or horse can significantly injure a dog.

Keep your dog out of rooms where livestock feed is kept. This sweet-smelling feed is very tempting for dogs to eat, but the high grain and fiber content in most livestock feed can change the pH in your dog’s hindgut leading to gas, an upset stomach and loose stool. If the farm animals are fed supplements or medications, they also are often stored in the feed room and could be toxic to your dog if consumed.

Many livestock dewormers (Moxidectin and Ivermectin) are also toxic to dogs and can cause drooling, incoordination, dilated pupils, seizures and sometimes comas. Ensure that syringes are disposed of safely around the farm and clean up any dropped doses that end up on the ground. Keep your dog out of manure piles for a few days after dewormers are given as some remnants of the medicine may end up in the manure as well as dead worms.

Ensure all pesticides, rodenticides, gas/diesel and antifreeze is stored up high out of reach of your dog. These poisons can have an alluring smell to dogs but are extremely toxic. Teach your dog that areas with farm equipment such as tractors, tillers, etc. are off limits. Dogs who become comfortable around heavy farm machinery may not realize their hazard when being operated and can easily become injured or killed.

When horses get their hooves trimmed often the farrier will leave the trimmings behind. Horse hoof walls are made of special keratinized skin cells that are digestible when soft and flexible. As the trimmings dry and harden, they become a danger when ingested as they can irritate the internal tissues in the esophagus, stomach or intestines. Even soft, flexible trimmings can cause irritation in your dog if the horse owner treats the horse’s hooves with any sort of chemicals. It’s safest to teach your dog not to eat hoof trimmings altogether using a leave it command. You may also want to adamantly clean up the trimmings after the farrier leaves.

While many dogs can be trained to be safe around the farm, not all dogs are cut out for farm life. Some breeds have such strong hunting instincts that it’s difficult for them not to chase chickens or race after cows. Keeping these dogs on a leash or opting to leave them at home when you head out to the farm may be the best choice for you, your livestock and your dog!

The American Kennel Club has a farm dog certification that asks your dog to perform a series of twelve exercises that are typical for a farm environment. Some of these exercises include walking around the farm, approaching livestock, reacting to another dog, and various other tasks that your dog may come across when on the farm. Preparing for and passing this test can help set your dog up for success when spending time around the farm!