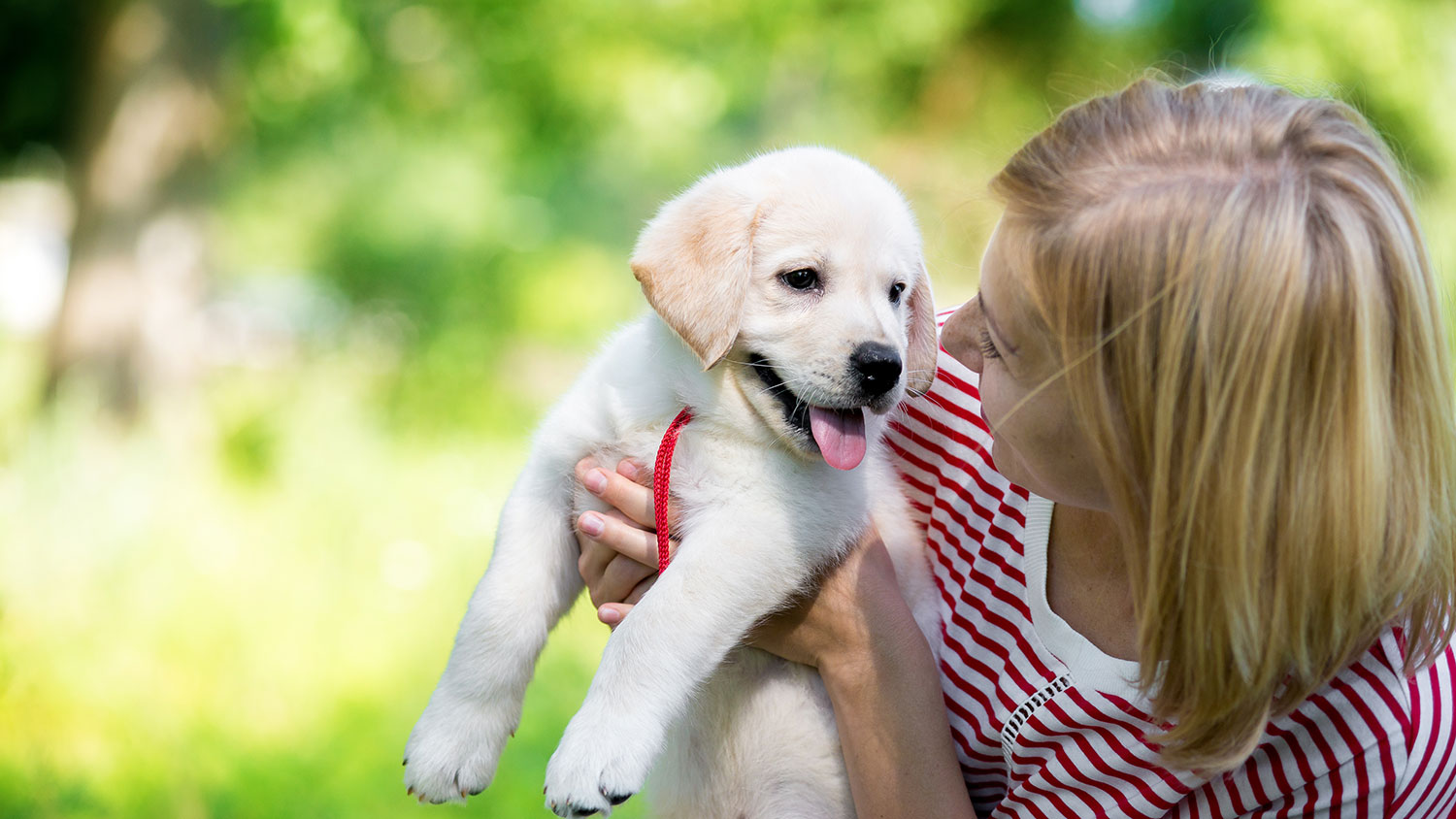 There are dozens of service dog organizations in the USA. According to the American with Disabilities Act (ADA), a service dog is “individually trained to do work or perform tasks for a person with a disability.” Learn more about the types of service dogs here and how they provide more independence to their owners.

According to Canine Companions for Independence (CCI), puppy raisers “provide specially-bred puppies a safe home, take them to obedience classes, serve up a healthy diet, provide socialization opportunities, and give lots of love.”

May, of Bluffton, South Carolina, has raised 14 puppies for CCI since 2002. Six graduated, seven decided they would rather be pets (“opted out” of the program) and one is currently in advanced training! May is taking a temporary break from raising puppies because she was partnered with a hearing dog, Huxley, last year. May is teaching 3-year-old Huxley to alert her to various sounds, such as the smoke detector, the doorbell ringing or dropping something. May provides additional insight on being a puppy raiser below:

Are puppy raisers allowed to have any other pets?

For CCI, you may have other pet friendly pets as long as the puppy is the only dog under the age of one in the household. Each organization has different guidelines, but if you have existing pets who are friendly, you will likely be able to find an organization for which you can raise puppies.

Do puppy raisers have to do any special training before being approved?

CCI provides a manual and support via phone, e-mail, or in-person. The CCI volunteer community also communicates to support each other and provide suggestions. Other organizations will have different requirements depending on their size and locations – some organizations will have puppy raisers attend weekly group classes before getting the puppy and then take the puppy to those same classes after the puppy is delivered.

The puppies, depending on which state you live in, can have the same access rights as service dogs. You need to check this out for your state. Otherwise, we ask permission of the management to bring in the pups. We just turned in puppy #14 so many of the places we do go to already are familiar with us being in and about their business with the puppies.

What is the most rewarding part of puppy raising?

There are so many different levels! I would say the ability to educate about what a service dog might do for others – puppy raising also helps teach children and adults that not all dogs are mean and vicious. And, of course, raising a pup that will eventually graduate and help others!

What kind of training do you (and other puppy raisers) need to do with the puppy?

We need to teach the puppy how to act in public; this is similar to teaching a child how to behave in a public situation. We teach the puppies how to properly behave in public - no running, no barking - and not to eat off the floor!!! Also, housetraining - when it’s appropriate to go to the bathroom.

What types of reports or tests do you have to do with your puppy during your raising period?

While raising, we have to fill out a monthly progress report on how the pup is doing. We list any issues that we encountered, places we went, and the temperament of the puppy. The trainers reading the reports will be able to signal potential issues and also get to know the puppy before the dogs are turned in for advanced training.

What surprised you the most when you got your first puppy home and started training her?

For our first puppy back in 2002, the first thing I recall is that Hadlee was not sleeping through the night. Luckily, my daughter took care of this and, after about three weeks, all turned out all right and night life returned to normal. Also, the fact that a puppy could get into so much mischief while under our watch!

What do you see as your most important job of raising a puppy?

The most important (job) was getting them to act appropriately in public! This often meant the dog staying in a DOWN while things were being done and there was no time to play. The pups had to learn to accept that just because there was a bird/duck/squirrel/leaf, that they couldn’t always play with it!

The hardest part of puppy raising must be forming an amazing bond and then giving the dog to the organization for his next phase of training. How do you handle and prepare for that?

There is no way that you cannot form a bond with the puppy. The puppy is your commitment 24/7. The way we looked at it, there were two or three positive options. First, we have a graduate. Second, the puppy doesn’t graduate and we adopt the dog. Or, third, the puppy doesn’t graduate, but we cannot take the pup, so we have close friends who sign up to adopt the puppy. In all cases, but not always, we will know where the pup is and will hope to have contact - this has been the case for the 7 that did not graduate. We adopted #2 and #6!

What type of people make the best puppy raisers? Can people who work full-time or have children do this important task?

I have seen many different types of people who are puppy raisers - they vary a lot! Many work full-time, some work part-time, some are full-time students, and some are retired. Some are highly athletic, many do a lot of road trips, and some don’t do much traveling. Having children is a bonus since it helps the pup to be around small people - having other pets works the same way.

What will happen when the dog goes back to the training facility for his professional training? How long does that training normally take? If a dog doesn’t pass the final training, what happens to him?

When the dog is returned for advanced training, the dog is placed in a kennel with a dog of the same sex. The dogs don’t have water bowls so they must learn to drink from a ball drip, similar to the water container in a hamster cage. The dogs are put into groups (called “strings”) with a trainer and the dogs will work with the trainer for the next six months, often switching to another trainer after three months. In addition, the dogs go through extensive medical testing in the first two weeks to see if there are any medical issues that need addressing. If any issues arise, the dog can be released from the program. Many dogs do not deal well with being kenneled (in a kennel facility) or have separation anxiety - these dogs may also be released. Our second dog lasted one week before she was released due to stress. Our first dog was released because the trainer popped open an umbrella and the dog freaked – the trainer could not get her past this fear and she was released. We had two dogs released before they were even turned in for advanced training – one due to fear aggression and the other due to fear of floor textures. If the organization finds that the pup MIGHT have a potential medical issue later in life, such as something detected in their physicals, then those puppies could be released, too. We also had a golden that was not food motivated - she was released.

If the dogs do pass the medical testing, then the trainer starts reinforcing the commands taught to the dogs by the puppy raisers and then bumps up the difficulty a step or two. The trainers send monthly progress reports to the puppy raisers the fourth Wednesday of the month to let them know what the dogs are learning and how well the dogs are doing. The dogs are also assessed on how they play/get along in their training groups (strings). Do they whine, bark or hump?

If all goes well and the dogs manage to stay in for six months, then they are placed in the next rotation for becoming a service animal. Many are not ready for the next level, but the organization has the dogs rotate through the training to give them the ability to work with the potential grads. Dogs not able to fully follow through on their commands will not be placed. Instead, they will return to the kennels for another three months of training.

If the dogs are not placed after nine months of training, they will be released from the program.

If someone is interested in becoming a puppy raiser, what should that person do? How should the individual pick an organization with which to work and volunteer?

When my daughter started us on this journey, she researched quite a few organizations and found this to be the best match for what she wanted as an outcome. Since then, we have encountered other dog raising groups that are quite different in many ways. When searching for an organization, think about what you want to get out of it – my family wanted to know where the graduating dog went. Although the person receiving the grad does not have to keep in contact, we are in contact with all of our grads. CCI also gave us a strong support group…and if you don’t want to be a puppy raiser, there are so many other ways and areas to volunteer!

What words of advice do you have for potential puppy raisers?

Be realistic and know that you will end up with household damages. Puppies chew, pee and poop. They also vomit! It’s almost like having a toddler! But the puppies can be very loving and willing to make you happy. They can be sweet one minute and then raise your boiling point less than a second later! They can follow a command with no issues and then one morning they look at you as if you just spoke a foreign tongue!  We call that the “teenage years.” The puppies do give 100% unconditional love - even when you least expect it!

What else should society know about puppy raising and service dogs?

A service dog is NOT a pet. It’s not something that you get and then ignore. It’s not a highly trained dog that will be able to go through life without constant training reinforcement. It’s an ongoing training. These dogs are deemed medical equipment - the same as a wheelchair, crutches or cane - you don’t pet those items, so don’t pet the dog. The dog is our responsibility, not the responsibility of any place that we visit. If you’d like to pet a service dog, ask first - you might be able to but most likely - because the dog is in a working mode – you will not be able to pet the dog.