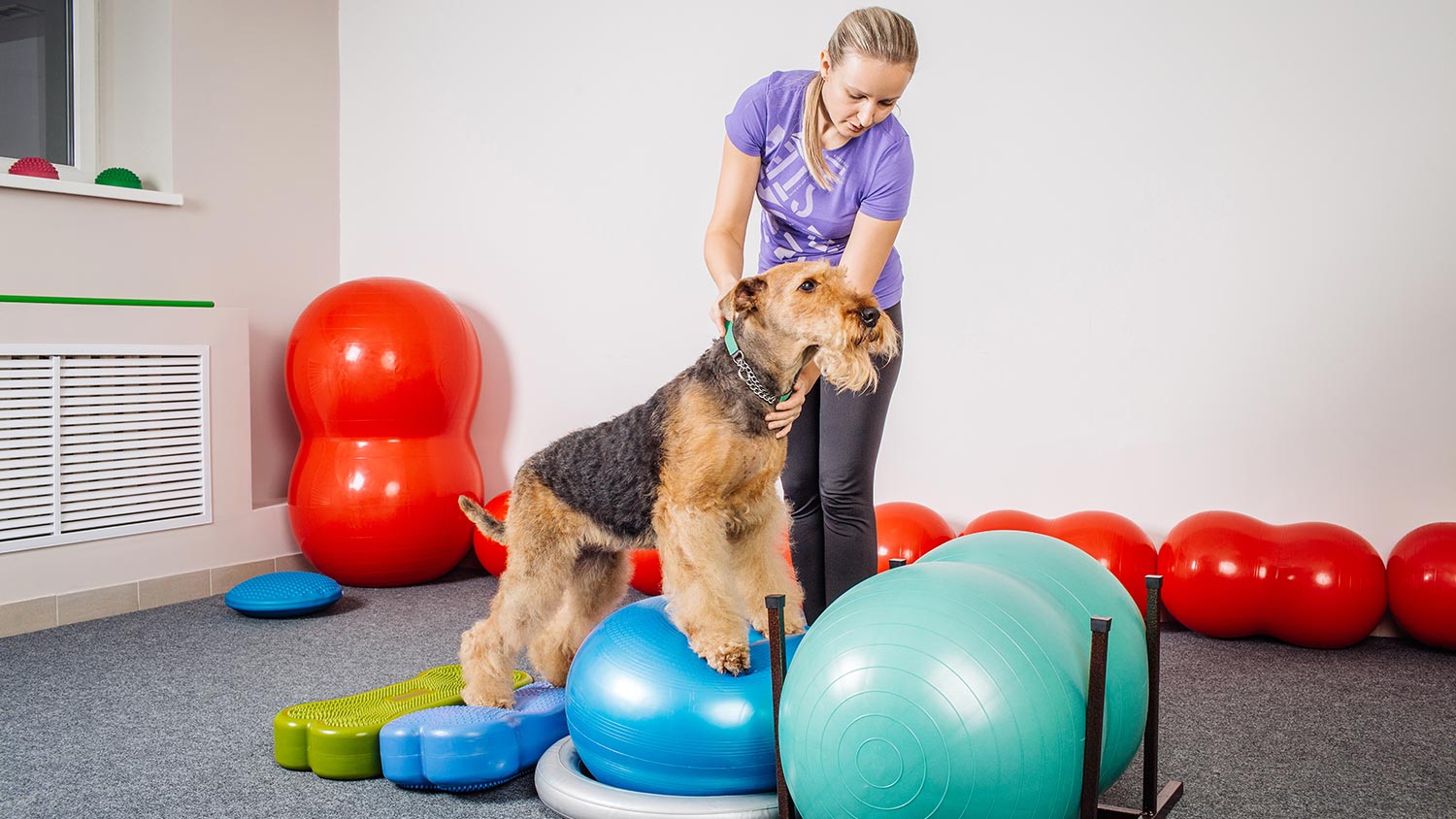 To continue your canine adventure of fitness skills, you’ll need to work on some basics. This is the second in a series of five blogs (Teach Fido the Fundamentals). Later in Fit Dogs, you’ll learn how to use those skills in combinations on the flat and with equipment.

For the skills below, you’ll need two targets or surfaces on which you’ll teach your dog to target his paws. This means you need somewhere for your dog to learn to place his feet on command – this could be a higher platform object, such as a firm sofa cushion, duct-taped phone book (so it stays sturdy!) or a low step stool that doesn’t tip over easily. Or your target could be a lower object that “feels different,” such as a cut up yoga mat piece that’s in a 12-inch by 12-inch square. If you own some exercise equipment, you could use an inflatable exercise disc or a foam pad.

The paw targeting skills will teach your dog balance and work on core strength! In addition, targeting just front or just rear paws shifts the dog’s body weight onto the opposite set of limbs and increases strength in those limbs. For example, having your dog stand with his front paws on a soft cushion will put more weight onto his rear limbs and have him work on core strength to balance.

Build up to 10-15 seconds of duration for each type of targeting below.

You may want to have your dog on leash for the first few repetitions so you can guide him onto the target object. Have the target object in front of your dog. Encourage your dog to walk up and put both front feet on the target. Say “yes” and treat your dog! Use your release word (“ok”) to let your dog know it’s ok to exit the target by removing his feet from the target and then walk your dog off. Repeat this a few times. Add a command word (“paws up,” “step,” “front feet,” “bench” or “toes”) before your dog’s paws hit the target. Over time, work on duration – give your dog more treats intermittently while he stays on the target and before you say the release word.

If needed, use a lure (treat) in front of the dog’s nose to encourage him to walk onto the target.

This is very similar to front feet targeting, but instead you’ll stop your dog (by feeding him and saying “yes”) when his back feet stop and stay on the target. Release your dog and repeat. After a few repetitions, add a command word (“back legs,” “ankles,” “hiney” or “feet.”) Work on duration as your dog progresses.

This is great for working on rear-end awareness. Many dogs do not think about their rear paws and paw their way through life mostly paying attention to their front feet! Rear-end awareness drills not only increase strength and coordination, but they can also make dogs better jumpers in agility. It can also produce better swimmers as they learn to use their rear legs with more focus in the water, too!

You’ll need two targets for this exercise. Place the targets a few inches apart or whatever distance would allow your dog to have his front feet on the first object and the rear feet on the second object when he’s in a neutral, normal standing position. You may want to have your dog on a leash, so you can walk and guide him onto the targets. When the dog reaches the final position of front feet on the first object and back feet on the second object, say “yes” and treat your dog. Release and repeat. Over time, increase the number of treats provided as you increase duration. Eventually, start to give treats more intermittently – in other words, have more time between the treats and give fewer treats while still having your dog succeed by not leaving the “both” position until you say your release word (“ok”). Your command word could be “both,” “all wheels,” or anything else that makes sense to you and that doesn’t sound like your other command words.

Some trainers use the technique called “offered” behavior – meaning the owner captures the dog doing a motion that is desired, says “yes” in that instant to mark that skill, and rewards the dog. Each time after that, the owner asks the dog to offer slightly more criteria by brainstorming, “How did I make that treat happen? Oh, was it my paw moving toward that target?”  in conjunction with shaping to teach paw targeting. Shaping means increasing activity in tiny, baby steps and each time asking for the dog to do a little more or do something for a little longer.

Go find your targets and get started!