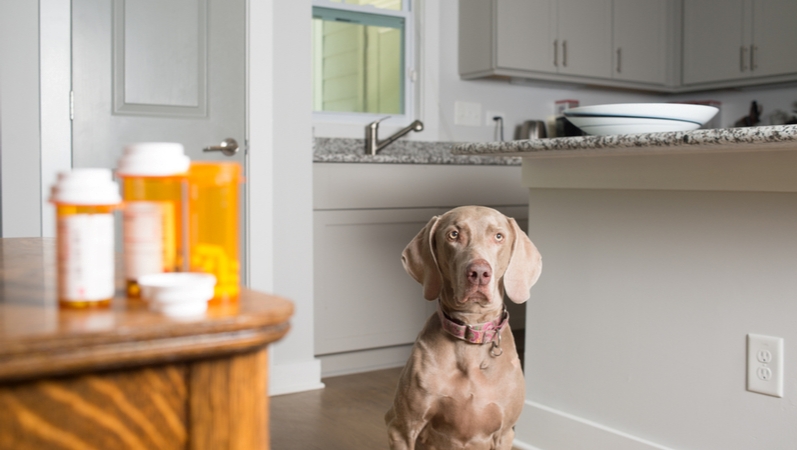 Did you know that human over-the-counter (OTC) and prescription medications harm more pets than any other household toxins? That's right. According to the ASPCA Animal Poison Control Center (APCC), human medications topped the list of poison concerns for pets in 2020. But which types of human medications are the most dangerous for pets? And what can you do to protect your furry friends? Keep on reading to find out.

Which Human Medications Are the Most Dangerous for Pets?

Many commonly used human medications are highly toxic to pets and can cause serious illness or even death if ingested. Let's take a look at some human OTC and prescription medications that you need to be particularly careful with around your pets.

The following common OTC medications are toxic to pets and should be kept out of their reach at all times:

Many human prescription medications can also cause serious health issues for pets, including:

What to Do If Your Pet Ingests Human Medication

The medications listed above are just some of the most common human drugs that are dangerous to pets. Please visit the ASPCA's website for more information about human medications and their effects on pets.

If you think your pet has ingested human medication, contact your veterinarian or the ASPCA Animal Poison Control Center at (888) 426-4435 immediately. They'll be able to advise you on the best course of action, based on the type and amount of medication ingested.

In some cases, your vet may be able to induce vomiting in order to remove the medication from the pet's system. Other treatments for overdose and toxicity may include activated charcoal if the drug has been absorbed by your pet's body, and intravenous fluids to combat dehydration and treat shock.

If possible, save the medication container or bottle and bring it with you when you take your pet to the vet. This will help them determine which drug was ingested and how much was taken. In addition, try to provide your vet or the ASPCA Animal Poison Control Center with as much information as possible about your pet's health and behavior before, during, and after taking the medication.

How to Protect Your Pets from Human Medications

The best way to protect your pets from human medication poisoning is to keep them out of reach. Place all medications, both prescription and OTC, in a secure place where your pets can't get to them. Remember, medications left out on tables, countertops, and nightstands are easy targets for pets. That's why it's best to store all medications in a lockable cabinet or drawer.

If you keep medications in your bag or purse, be sure to keep it zipped closed and stored in a place where your pet can't get to it. In addition, always keep track of your medications. If you know your pet's around, try to avoid taking medication in front of them or leaving the bottle unattended.

The bottom line? Always be vigilant about keeping human medications away from your pets and contact your veterinarian or the ASPCA Animal Poison Control Center immediately if you think your pet has ingested them.

Also, it's always best to be prepared for vet visits related to unexpected accidents and illnesses. AKC Pet Insurance (underwritten by Independence American Insurance Company) plans offer coverage for toxin ingestion and many other common canine emergencies. Click here to create a custom plan fit your dog and budget.